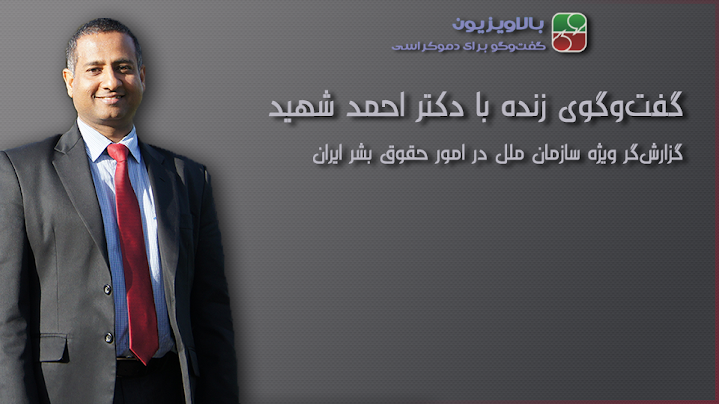 Ahmad Shaheed, UN Special Raporteur on Human Rights in the Islamic Republic of Iran responds to Balavision users, this being the first live exchange between Mr. Shaheed and the Iranian public.

Q. What method do you use in your work? How can people report information to you? How do you verify such reports? Does the UN have any mechanisms to help end human rights abuses in Iran?

A. Reporting human rights abuses raises public awareness and has been effective in a number of countries over the past 30 years. Iran cares about its international image and may therefore respond or take appropriate action. The government of Iran admitted to a number of abuse cases at the most recent UN meeting; if other member states persist, Iran will be forced to respond.
People can contact me through my website: http://shaheedoniran.org/

Q. The regime may deem some presidential candidates ineligible to run for office in the upcoming election, including religious minorities. What is your view on this subject?
A. Elections are one of the key constituents of democracy; denying presidential candidates to run is against the International Covenant on Civil and Political Rights (ICCPR). This year—unlike 2009—two UN officials will be in Iran so I hope the election will be free and fair.

Q. Economic sanctions against Iran lead to inflation, price hikes, and shortage of medicine, especially for children and special ailments and are therefore abuse human rights. Will you be addressing that? Also, why is Iran sanctioned only because of the nuclear issue and not for abusing human rights?
A. I have discussed the sanctions as abusive with several countries and asked them to make sure medical and [humanitarian] goods reach Iran.   The European Union has, indeed, issued some sanctions based on human rights; as a result, a number of those responsible cannot travel abroad.

Q. The UN High Commission for Refugees has been criticized for taking an inordinate amount of time to deal with the status of Iranian refugees in Turkey, Malaysia, Greece, and other European countries. What is your view on the subject?
A. I’m aware of the plight of the refugees and have asked that they resolve the issue without delay. But I have no control over the criteria based on which refugees are assessed. Most of them are likely to suffer even more harm than they already have, but unfortunately, the issue is complex and there is no quick resolution at hand.

Q. The plight of Afghani refugees in Iran is dreadful. A number of them were recently executed; their children are not allowed to get any education; Iranian women who marry Afghani men cannot obtain identity cards and their children may not attend school. Do you have any plans to help better their condition?
A. This is a very serious problem; I shall investigate it further and include it in my future report. Meantime, I will try to discuss the issue with the Iranian government.

Q. In the eyes of the Iranian government, gays and lesbians are either perverse or criminal; many are forced into marriage or undergo a sex-change operation without adequate information. What information or ideas do you have about this problem?
A. I’m the first official that has reported on this issue at the UN. My greatest concern is the quality of life and the means of livelihood of homosexual and transgender individuals in Iran. The government strongly disputed my report but the UN rejected their objection; many member states have asked me to look into this matter more earnestly, and I promise you I will.

Q. The right to choose belongs to every citizen yet laws governing political parties in Iran relegate it only to those who believe in the doctrine of Velayat-e Faqigh, Supreme Leadership. Have you addressed this in your reports?
A. Iran is a sovereign country; our influence is therefore limited. I have reported on the problem, however, and have contacted some rejected candidates and reference them in my report. Iran has a literate population that should have access to free and fair elections.

Q. Are you aware of the status of ethnic minorities in Iran? About 300 Arab prisoners are under torture in different cities and forced to make false confessions. Arabs are also discriminated against, socially, environmentally and politically.
A. This is a principle example of human rights abuse in Iran. I have contacted the IRI government more than 30 times and discussed the problem of the Arab minorities with them. Ethnic and religious minorities are prohibited from exercising their rites and rituals, or speaking or teaching their language to their children, Azeris, Kurds, and Baluchis included. I shall continue to report on this.

Q. A number of jailed Baluchi religious activists may be executed any day. Do you have any action plans in this regard?
A. At the meeting in Geneva I spoke at length about Baluchis to the Iranian delegation. They tried to convince me that the reports were false. It is crucial for me to have accurate information about their status. I welcome being informed via my website.

Q. How do you verify claims of abuse of prisoners—rape or torture—in the absence of eye witnesses?
A. We follow the guidelines in the UN Istanbul Protocol; psychiatric assessments may also be used to verify claims. A British nonprofit organization, Freedom from Torture, has examined close to 5,000 cases related to Iran. I selected 50 cases of rape for my report, equally divided between men and women, which have been verified through lengthy interviews, and in some instances, physical examination. We can verify that the case of Sattar Beheshti was mishandled by the security forces from the start and ended up with his murder; but it is more difficult to identify the torturers. If prisoners who have been tortured share more detail of their suffering with me, it will make my efforts more effective. Following years of denial, Mr. Larijani finally accepted at the latest UN meeting of the Human Rights Commission that torture has occurred. This is a hopeful sign. History shows that torture will end in all such societies. If you can serve as a witness for cases of torture without endangering your life, please go to my website.

Q. Why don’t you travel to Iran?
A. I need a permit to travel to Iran in an official capacity. State media have said I am free to visit as a tourist, which does not serve my purposes as a UN official. Previous UN rapporteurs have not had much luck either. The IRI believes my reports reflect the views of its opponents. If so, they should let me go there and talk to members of parliament and state officials so that their views may also be reflected in my reports.

Q. Dr. Mohammad-Ali Taheri was accused of holding “other” spiritual beliefs and has been in jail for more than two years. Dr. Shaheed had been made aware of his case but never pointed it out. Why?
A. I have talked to the IRI but they do not have any tolerance for conversion or religious deviance. I will check to see if I have mentioned Dr. Taheri specifically; if not, I will look into it.

Q. If a new legislation that is before the Parliament passes, following new mystical beliefs and practices will be considered a crime, and inquisition will become law. We are asking you to prevent this from happening.
A. Thank you. I will definitely prepare a report on this issue.

Q. Have you been able to help the families of political prisoners, and do you have any plans in this regard?
A. I understand their plight but have not been able to meet with them personally. It is clear that families of prisoners face difficulties, including being prohibited from pursuing higher education. I have mentioned these issues in general terms; if you can provide specific information without jeopardizing your own safety, please contact me.

Q. I was jailed for five years in the ‘30s and have been a refugee in Geneva with my family for some time. Do you have a representative in Geneva?
A. You can contact one of my colleagues in Geneva or contact me via my website.