Interview with Director of "US Campaign to End the Israeli Occupation" 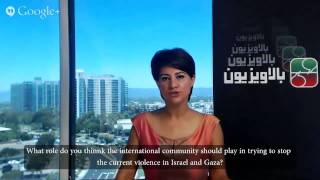 BV When was the U.S. Campaign to End the Israeli Occupation founded, and what is its mission? JR The US Campaign to End the Israeli Occupation is a national coalition here in the United States of more than 400 organizations, and our mission is to work together to change and challenge those U.S. policies that support Israel’s human rights abuses and apartheid policies toward the Palestinian people, and to change our government’s and our institutions’ approach to this issue, to support human rights as an international law and equality, and we were founded in 2002.

BV How does the Campaign view the recent conflict between the Israelis and the Palestinians, and do you believe this one is different from the past? JR I don’t think that the nature of Israel’s violence and massacre of the Palestinians in the Gaza strip is fundamentally new; it’s a repetition of existing patterns that we’ve seen over the years, and Israel has a very dehumanizing term for these types of attacks against the Palestinians which they refer to as “mowing the lawn” and this is part of the dehumanization of Israel for the Palestinian people. And my take on this current round of violence is that it’s one of a clear massacre where the United States is providing Israel with both the means to protect itself from Palestinian weapons but on the other hand also providing Israel with all of the incredibly devastating weapons that it’s using to massacre Palestinians by the hundreds.

BV Israel has repeatedly declared that it attacks and bombs Gaza in self-defense and that Hamas uses Gaza residents as human shields. How should Israel be defending itself? JR Well, Israel is protecting its citizens very well from Palestinian rockets through the Iron Dome system, which is intercepting and knocking down 90% of all Palestinian rockets that are firing towards the Israeli population centers. So, what Israel is doing is not about self-defense because it has the means to protect itself, though what this is really about is about inflicting collective punishment on the Palestinian people and committing terrible, terrible war crimes in the course of this brutal attack.

BV What is the role of the international community in putting an end to this conflict? JR Currently, the Secretary General of the United Nations is attempting to negotiate for a cease fire; the U.S. Secretary of State, John Kerry, is in the region attempting to promote a cease fire, and what’s needed is not only an immediate end to the violence and Israel’s massacres against the Palestinian people but fundamentally, a change in the condition of the Palestinian people, especially in the Gaza strip which is simply intolerable. Palestinians have been living under an illegal blockade now since 2006, and this is an illegal blockade which has been condemned by the United Nations, and so what we really need is pressure on the United States in particular from other countries around the world to end its diplomatic protection of Israel which allows it to continue these illegal policies toward the Palestinians.

BV What has your Campaign done, and what is it currently doing, to stop the conflict in Gaza? JR Right now, we’re very focused on trying to pressure our decision-makers--our members of Congress, the President--to get Israel to end its massacres of the Palestinian people; we’re busy out on the street protesting; taking action in the media to try to get our point of view across. But at this particular point in time, it’s all about stopping the immediate carnage and massacres that Israel is inflicting on the Palestinian people, and once that ends, we’ll move toward a stage where we try to pursue accountability for the crimes that Israel has committed in this latest round of massacres.

BV What is the role and the impact of social media, especially Twitter, on media coverage of the current conflict? JR I think that social media is having a huge, huge impact on the way that people view this issue all over the world, and in particular in the United States as well. Even though Israel is trying very hard to keep foreign journalists out of Gaza right now, they’re nevertheless still failing in terms of trying to control the scenes of devastation that are coming out of Gaza through social media, and the fact that millions of Americans and billions of people around the world are having this really unfiltered access to what is happening in Gaza in real time is making it very difficult for Israel to maintain this notion that it’s somehow acting in its own defense when it’s quite clear from these pictures, these scenes of devastation, that Palestinians are being massacred on a huge scale.

BV Does the general public have a role to play in trying to end the current conflict? JR Yes, I think that the general public no matter what country they live in has a role to play in helping to end Israel’s violence and the hostility and brutality toward the Palestinians, especially governments that can do something to put pressure on the United States to end its military and diplomatic support for Israel, because the reality is that it’s only because of the support that Israel receives from the United States that the international community doesn’t do anything about this.

BV Why are you, as an American, created this campaign and trying to put an end to the current conflict? JR I feel personally very, very responsible because as an American citizen it’s my taxpayer dollars that are financing the weapons that Israel is using to massacre the Palestinian people; it’s because of the diplomatic protection that the United States provides to Israel that Israel is allowed to continue its apartheid policies toward the Palestinian people. So I think all Americans regardless of their race or religion or ethnicity--because we all pay taxes, because we all support and are part of a government that is promoting these policies--we’ve a responsibility to change them.

BV Thank you for your time.