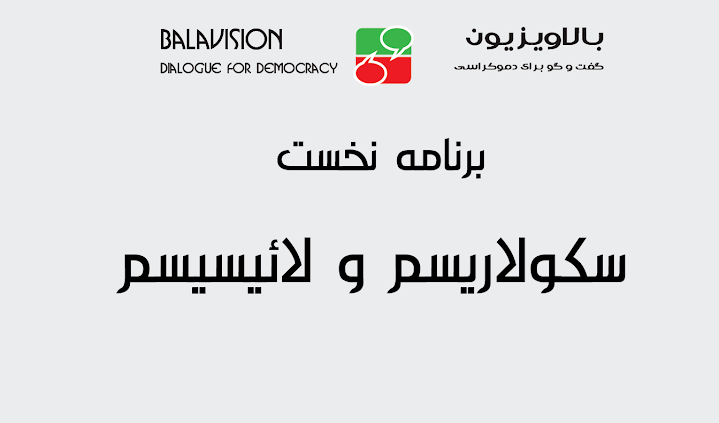 In this program, which is part of the “Social and Political Concepts Series,” we will examine the terms “secularism” and “laicism” and their usage among Iranians.

Wearing the Islamic hejab is prohibited in French schools; it is allowed in Germany and mandated in schools in Iran. Do secular states forbid the faithful to wear religious attire or to perform religious rites and rituals? A court in the city of Köln, Germany, ruled the circumcision of children illegal, but the German Parliament passed a law legalizing circumcision. How do secular states deal with religion and religious edicts and practice? Teaching religion is prohibited in French schools but permitted in Germany. What is the difference between secular and lay/laic states? The terms ‘Neo-secularism’ and ‘political secularism’ are commonly used in Iran. Is this terminology accurate? --------------------- In this program, which is part of the “Social and Political Concepts Series,” we will examine the terms “secularism” and “laicism” and their usage among Iranians. In a secular state, are believers prohibited from freedom of expression, or from propagation of religious beliefs, or from freely practicing religious rites and rituals? The terms secularism, laicism, agnosticism, and atheism indicate different notions but some Persian language media use them interchangeably, or substitute one for the other. Secularism and laicism belong to the domain of politics and social science. Agnosticism is mostly used in epistemology and philosophy and indicates abstention from providing definitive answers to philosophical questions. Atheism, which signifies disbelief in the existence of deities and religion belongs to the domains of philosophy, theology, and the sociology of religion.

Most Persian language media ignore the difference between secularism and laicism and sometimes qualify these terms with obscure and inaccurate adjectives and suffixes that further alter their original meaning. Secularism, meaning worldly and earthly as opposed to religious, divine, and heavenly, is defined in most authoritative sources of reference as “separation of church and state.” The concept of secularism emerged in Western Europe during the Enlightenment or Age of Reason beginning the late 17th century in the works of Spinoza, John Locke, Voltaire, Max Weber and other philosophers and social scientists. The term first appeared in 1851 in a brief text by the British thinker, George Jacob Holyoake. Secularism derives from the Latin saecularis, meaning “100” or “century.” From the perspective of the [Christian] Church, anything that is worldly and earthly is “temporal” and finite while all that is divine and heavenly is “eternal.” Therefore, in the religious lexicon the term secularism, which relates to the finite period of one century, is the opposite of “divine” and “eternal”. Based on the above, some Iranian translations use guiti-gara’ee (lit., ‘earth-bound’) as a synonym for secularism in Persian. But the original term, secularism, has entered Persian and is favored over all synonyms that have been proposed to date. Secularism refers to a process that Max Weber called “disenchantment of the world” (Entzauberung der Welt, in the German original). In a secular system religious values and beliefs have lost their authority and have been replaced by values and beliefs whose sources are human and earthly. In the course of secularization in Western Europe, first education and science were freed from religious dominion. Next, law and politics, liberated from religion, gained autonomy and became secular.

The application of secularization to science meant replacing sacred beliefs and scriptural teachings with earthly and empirical methods. Secularization in science means that the validity, integrity, and accuracy of a hypothesis or scientific theory can only be measured using scientific methods such as observation and experimentation; it also means that a proposition cannot be rejected or accepted based on religious belief, doctrine or practice, or by virtue of its correspondence with sacred literature. A secular outlook is human-centered and is founded on the autonomy of rational thought from religious beliefs, values and customs.

SECULARIZATION IN LAW AND POLITICS

Secularization in politics demands the separation of church and state and aims to substitute the traditions that are rooted in religion and extrapolated from sacred literature with laws formulated by humans. Opponents argue that man-made laws have to be consistent with scriptures and may not contradict religious foundations. For example, according to the Constitution of the Islamic Republic of Iran, laws passed by the Parliament have to agree with the fundamentals of Islam and the Guardian Council has the right to veto or cancel legislation considered in conflict with Islam. Germany is a secular state; it is not laic. In Germany, the executive, legislative and judicial branches are separated from the church; religion and sacred edicts play no part either in legislation or the political management of the country. This means that laws are considered legitimate because they are passed by the parliament, not because they are based on a sacred text. Nevertheless, in Germany religion is not as separated from public life as it is in France. In Germany, students have a right to wear the Islamic hejab or other religious attire to school; the entrance to some schools in Germany is crowned with a cross; churches in Germany enjoy tax exemptions and the state helps them collect church tax. Germany has a number of political parties designated as “Christian” whose platform calls for upholding a variety of religious values. A political party such as the “Christian Democratic Union,” which is currently [January 2013] in power in Germany in a coalition with the Free Democratic Party, would not be possible in France. But not every society that is not governed by religion is totally laic or totally secular. For instance, in secular Germany, significant trends are underway to drive religion further out of the public sphere. This powerful movement calls for banning religious icons, signs and symbols in schools, a demand that has in turn elicited numerous and varied rulings by German courts. On the other hand, in France, which is a laic state, some people want to repeal the law banning the hejab in public schools and defend the right of Muslim women to wear the hejab in schools and public places. An official state religion does not necessarily define a government or a state as theocratic or religious. For example, both Great Britain and Denmark have official state religions. But they are secular societies and not theocratic or religious because in spite of their state religions, all parliamentary legislation in these countries is based on humanistic values and is not measured by religious standards. The religious institution has no executive power in Great Britain or Denmark. The queen—or the king—of England is also the head of the Church of England but does not let religion interfere with her/his political responsibilities; nor are followers of the Church of England granted any special benefits over other citizens. Although secular societies adopt different approaches in their efforts to keep religion separate from state institutions and out of the public sphere, governments in secular societies are impartial to the variety of religious traditions and do not endorse, support, or defend any specific religious values and beliefs. On the other hand, a laic society is emphatic about the total separation of church and state and the governments of such societies try to keep religion out of the public sphere to the extent possible. Extreme laicism is also known in history. In extreme laicism the government views religion negatively and endeavors to reduce its influence in the public sphere. The French government after the 1789 Revolution is an example of extreme laicism; it went so far as to try to replace religion with secular rationalism and the substitute the symbol of religion with a symbol of rationalism.

SECULARISM AND LAICISM IN IRAN

Many Iranians, especially in the Persian language media, use secularism and laicism to mean the same thing. They believe that church and state are separate in both systems; that religious values, beliefs, and assumptions do not get preferential treatment over humanistic laws in either system; and that both secular and laic governments have an impartial and unbiased position vis-à-vis religious beliefs. Over the past thirty years, some “religious reformists” and “religious intellectuals” have coined new words using an adjective with the term secularism; some among them use new expressions such as a “non-religious secular government” and “anti-religious secular government.” The term “non-religious secular government” as used by religious intellectuals is close to the accepted and classic notion of secularism described earlier, while “anti-religious secular government” closely parallels the definition of extreme laicism. Some representatives of this group, such as Dr. Abdolkarim Soroush, distinguish between “political secularism” and “ideological secularism,” qualifying the former as classic secularism and the latter as “non-religiosity or anti-religiosity.” In the same vein as religious reformists, a number of non-religious writers have also qualified secularism with extra adjectives and suffixes, including “neo-secularism,” a term used by Mr. Esma’il Nooriala to mean the separation of state not only from church but from all ideology. The accuracy of such usage is not at issue here. Ideologies such as communism and fascism that defined a number of states in the 20th century were created by humans and did not derive from divine, heavenly, or religious sources. The term “neo-secularism,” meaning the separation of state from any form of religion and ideology ignores the standard academic meaning of secularism and its origins and evolution; as such, it adds another confusing term in Persian. As mentioned above, secularism refers to “earthly” as opposed to religious and divine, and the goal of secularism in the political domain is the separation of state from religion. Ideologies such as communism and fascism that like religion have a dogmatic worldview are earthly systems generated by humans. Applying secularism to such systems, even compounded by an inexact suffix such as “neo” leads to ambiguous interpretations and a variety of misunderstandings that confuse the issue. Secularism and Laicism are terms that are already established and defined in political and social science. Adding qualifiers, formulating imprecise expressions and using them to express nonstandard concepts and interpretations diminishes precision and increases the ambiguity of confounded definitions associated with these terms in Persian. It is often the case that those who formulate these new expressions either fail to check authoritative sources of reference or pay them no attention. Some state media in Iran that oppose secularism refer to it as a “weapon” or “tool” and a means of “purging society from religion”. In fact, according to the standard definition of the term, secularism means nothing more than the separation of state from religion and the state’s impartiality and unbiased position vis-à-vis religion. Secularism has nothing to do with opposition to religion or with any efforts to eradicate religion in private life. Even laic states such as France are not “anti-religious.” Though France is laic, many French political leaders underline their devotion to Christianity. The intention to purge society from religion is only found in extreme laicism. In secular society, state and religion are separate but the state makes no attempt to purge religion and does not interfere in the religious domain. Secular and laic states defend freedom of all religions equally; they do not favor one religion over another. A key feature of secularism and laicism is a government that defends freedom of religion equally as freedom from religion. In secular and laic societies all citizens enjoy the right to freedom of religion, opinion, and expression; they have a right to practice their religious beliefs, rites and rituals provided their beliefs, rites and rituals—sacred or profane—do not conflict with or undermine human rights or the laws passed by parliaments whose members have been elected through free and fair elections.