The Parliament’s ‌Bill on Prohibition of Group`s Activities 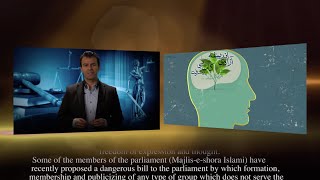 Some of the members of the parliament (Majlis-e-shora Islami) have recently proposed a dangerous bill to the parliament by which formation, membership and publicizing of any type of group which does not serve the interests of the Islamic Republic is considered a crime. According to national and international laws, every person has the right to freedom of expression and thought. Article one of this bill provides: “To protect people from brainwash, inclination to disbelief, ideological induction to change meanings, deceptive seduction, establishing fear and intriguing believes, and further to prevent misuse of people, sects, and pervert ideas, the law of prohibiting formation, membership and publicizing sects, financial and spiritual supports of them is sanctioned”.