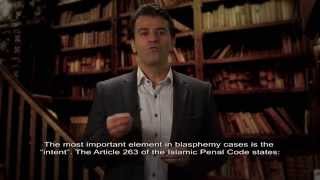 Soheil Arabi is a 30-year old Iranian man. He is married and he has a 5-year old child. Soheil was arrested by the Revolutionary Guards (RG) in the month of November, 2013 and was interrogated and kept in solitary confinement for two months – he is currently held in the Section 350 of the Evin Prison by the RG. Soheil was charged on three criminal counts of insulting Haddad Adel, Ayatollah Jannati, propaganda against the Islamic Republic of Iran (IRI), insulting the Supreme Leader and the Prophet (Mohammad). Soheil was sentenced to flogging and fine in respect of insulting Haddad Adel and Jannati. With regard to propaganda against the IRI and insulting the Supreme Leader, Soheil was given a sentence of three years imprisonment by the Revolutionary Court number 15, which sentence was confirmed by the Appeal Court number 54. And in respect of the charge of blasphemy, he was given a death sentence by the County Penal Court number 76, which was confirmed by the Supreme Court number 41 without due attention to Soheil’s testimony and his attorneys’ defense arguments.